What Happened That Time We Asked Students to Think: Part I

The greatest reason I’m having an intellectually stimulating year is because of my colleague, Ms. L. We tend to have similar big picture ways of thinking: we like to dwell in the so what, I’d say. What makes this collaboration work, most importantly, is that Ms. L is concerned with the details. I love big ideas but tend to be less interested in the day-to-day, which is why sometimes, for me, planning on the daily can be draining. Ms. L, though, LOVES the details. I mean, loves them so much that when she says she’ll spend some time working on a project, I know that when she’s done, it will include so many aspects of that plan that she’ll have accounted for contingencies B-Z, and they’ll all be amazing. 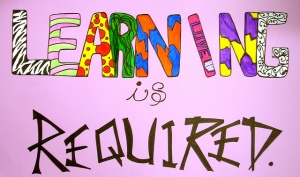 How lucky am I? Her desire to work together and her endless ability to step out of the present moment to remember the WHY of what we’re doing has made a year that I was dreading actually into one that excites me to work with kids and with teachers who want to do hard things. I also appreciate her honesty to tell me when I’m way off base, or her willingness to make suggestions. I’ve found that in the best working relationships I have, my collaborators speak honestly and are less concerned with hurting my feelings. I’m tough. I can take it. And oftentimes I’m so caught up in my own ideas that I need someone to give me different ways of thinking and doing something.

We launched two successful projects. The first was from this incredible website, Moving Writers that used a photo book of essays called It’s Complicated: The American Teenager. Daily, we shared what was happening in her Honors classroom and my College Prep one. We modified the Moving Writers’ work and kept everything in a folder on Google Drive. To say that the final portraits exceeded our expectations was an understatement.

Buoyed by that success, we then decided that we’d revise my earlier work I’ve done in years past based on Carol Dweck’s work with growth and fixed mindsets. This is where Ms. L is even more amazing: she suggested we have students experience learning through principles of design theory. Design theory was all new to me. What I realized, though, was what better way was there to learn and model the processes of learning than to do something that might, indeed, not be as successful as I’d hoped? Wasn’t that the beauty of a growth mindset? If it bombed (and it didn’t, but you’ll have to read the next post for the nitty gritty–you should, too; spoiler: it’s amazing!), that would be okay, because I would have learned something about practice during the process. And while I was most concerned that I’d be failing the kids, what I’ve come to realize is that the failure would be in if I just kept teaching the GM unit like I’d done in the past. If I wasn’t willing to challenge myself and to grow, then, seriously, how could I expect my students to do the same?

Coming next: what happened when we asked students to get comfortable with failure…

One response to “What Happened That Time We Asked Students to Think: Part I”