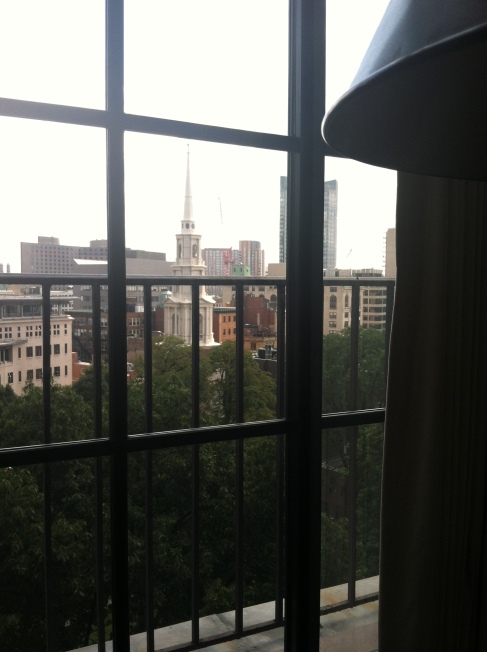 My view out the window of the Boston Athenaeum

Yesterday, I cut an afternoon of enjoying cupcakes with my former colleagues short to have a sort of intervention with a former student. Those cupcakes (from Georgetown Cupcake) were quite delightful, as was the company once we got through the details of my leaving.

My former student graduated from high school in 2011 and has been working at the Gap and the movie theatre since then. When I had her as a sophomore, she was one of the most difficult students I might have ever taught: loud, pushy, challenging…and hilarious. It’s often tough to discipline a student when they have a comeback to something you’ve said that is so witty and/or ingenious that you just have to give them credit. She was that student.  She was also gifted; seriously. She had a way of writing that was quite compelling, loved words, and was a voracious reader (of primarily urban lit). The same qualities that I came to covet, however, were her eventual downfall at that school. She decided to withdraw from that small pilot school before her senior year started out of worry that she wouldn’t be able to restart anywhere if she was expelled. Thus, she ended her senior year at one of the large, failing public high schools a few blocks away, where she says she didn’t work particularly hard.

She tells me that she knows she didn’t work hard, that she usually doesn’t work hard, and that she hasn’t been pushed to do hard work since my class, her sophomore year.

Look, I’m a good teacher, but I wouldn’t call myself an amazing teacher. Transformative in moments, but transformative is up for grabs, particularly depending on the context and the student. With this young woman, though, I figured out early on that she was quite smart and that she acted up in her other classes because she was bored and wasn’t challenged. Her coping mechanism was to draw attention to herself, stop the instruction that was happening, and perhaps learn something that she didn’t already know. Unfortunately, it was too easy to send her to the office, suspend her, kick her out of class, take other punitive measures that deprived her from learning.

I can’t quite remember what it was, exactly, that clued me in to her brilliance, but I bet it happened in unstructured time: either coming or going from class, or in the hallway, or something I overheard. Long story short: once I figured her out, I pushed her, demanded more, kept delivering the same message that she was too smart to make dumb choices and that, in the words of Research for Better Teaching, I wasn’t going to give up on her, even if she gave up on herself.

She’ll tell you that she is one of my favorites. Maybe she’s right. But she earned that status. And I probably never worked as hard as I had to that point to figure out what students who already “get it” need in a classroom of their peers, many of whom are struggling to even get to grade level. For me, I learned to praise the good, to add more advanced tasks, to put her in a leadership role. She never disappointed me.

No big shocker that when she called (after standing me up twice previously), I said I’d meet her, even if that meant curtailing my socializing.

In our hour conversation, seated at a picnic table, she told me that she wasn’t sure what she wanted to do, but that she wanted to “be ill.” She’s obsessed with being comfortable, or a level above comfortable, as she explained. I was more concerned with the practical: an undergraduate degree, a career, a retirement plan, but it was hard to make much headway with her. Finally, after coming at the question of what she wanted to do from different avenues, she finally admitted that she doesn’t want to be her mother or her grandmother, who are constantly struggling, having to ask for money from other family members, hating their jobs. That led to some brainstorming about people with jobs she admired (short list: agent, music producer, guidance counselor–can you guess which one I picked?!), which segued into thinking about skills she needed to have and where to get them. Then, we talked about the power to change our lives: that even though she wasn’t entirely sure what she wanted to do now (and I had to keep trying to disabuse her of that notion: that you’re really not supposed to know what you’re going to do with the rest of your life when you’re only 19), she could change her mind. And then, finally, that if all signs were telling her that she should work with children, then she should, in some capacity. Teacher salaries were fairly decent, particularly in Boston.

She would be a phenomenal teacher or guidance counselor because, as a tough kid, I think she’d bring an understanding to how to reach tough kids. We ended with an action plan: she was going to make a list of schools with programs she might apply to and I was going to track down some former students who were working in the fields in which she indicated interest. She’s supposed to report back on Sunday.

Then, she asked me to spell “minutiae” for her. I used that word a lot when I was her teacher, reminding students that they were getting too caught up in that and not nearly enough in the bigger picture (i.e., they’d go ballistic about my requirement to format ALL papers in 12-point, Times New Roman but wouldn’t bat an eye about being asked to write an analytical argument about a text they’d read). Maybe that was a reminder not to get caught up in my own minutiae this year…?

I left urban teaching a few years ago because I was exhausted: I think being a Black teacher exacts its own glories and sacrifices. I loved the kids–at the same time, I was also the person they often turned to…so while one student doing that might be okay, multiply that number by 10, or 20. I’m ready to return to urban schools after my sabbatical, though, and I’m trying to do a better job about connecting my former students to each other: surely they can draw on their experiences to help each other. That’s what I told my student yesterday: we have a responsibility to help the community. Otherwise, what is this work for?!

Now, as I begin to turn the corner and approach another school year, I decided to begin my fellowship at the Boston Athenaeum today. I sit at a table in the fifth floor, designated for quiet, as I pull out my notes, my hopes, and my beliefs for an excellent school year. The picture above is my view from my table.

And my hope springs, yet, anew.